8 Tips For Winter Pest Control & Why You Need Them 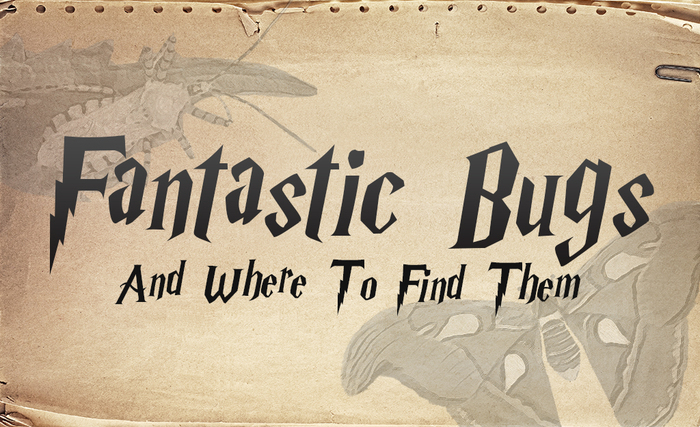 Everyone loves the wonderful Wizarding World of Harry Potter that J.K. Rowling has created. From books to movies to theme parks and more, the franchise has dominated almost every form of media imaginable.

The most recent addition to the Wizarding World’s canon is the newest Fantastic Beasts And Where To Find Them film, which was released last month to the delight of fans around the world. The film has, unsurprisingly, been a box office success, pulling in more than a half a billion dollars already.

The Fantastic Beasts series is a delightful addition to the Wizarding World because it portrays wizards from a time before Harry Potter and his friends were even born. It is also a franchise built on the exploration of the incredible and awe-inspiring magical creatures that can be found throughout Rowling’s fictional universe.

That idea got us thinking about some of the most incredible and unique creatures that can be found right here in the real world. Specifically, and unsurprisingly given our area of expertise, we wanted to take a look at some of the most fantastic and amazing looking insects from around the planet.

To that end, we researched ten of the world’s most incredible and visually unique insects and illustrated them. We also found out where people can find these amazing insects as well as some interesting facts about them, presenting it all in a way that would make Newt Scamander proud.

Without further ado Insight Pest Solutions is pleased to present some Fantastic Bugs And Where To Find Them! 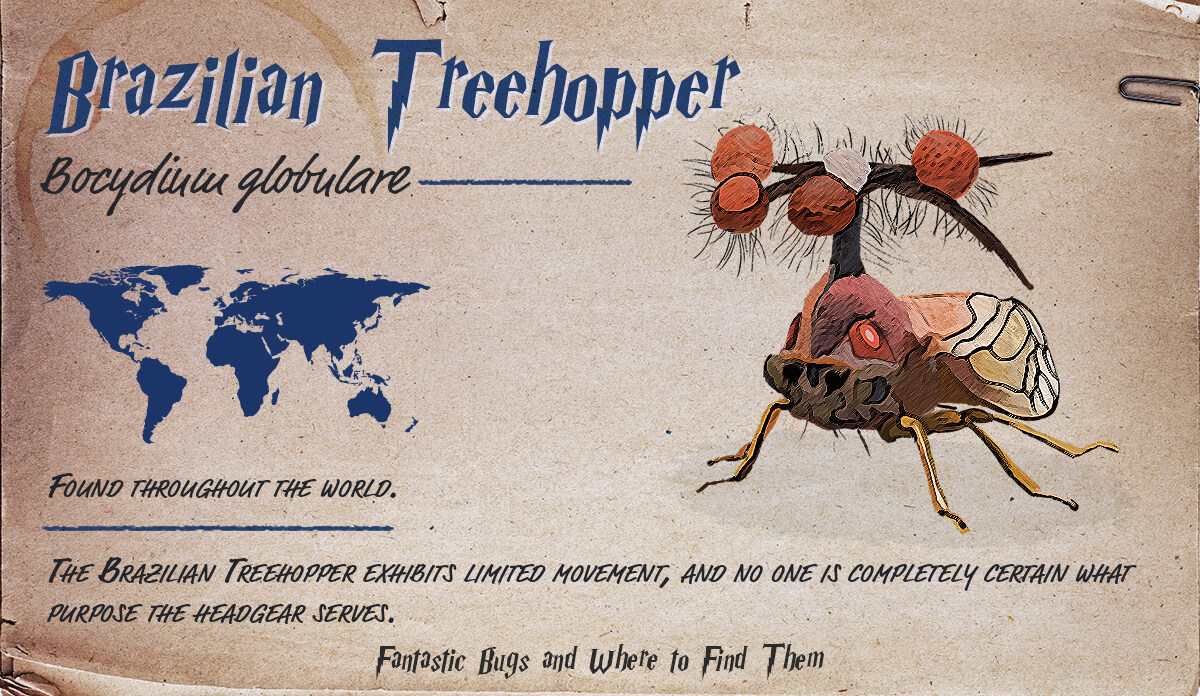 One of the bugs that stuck out to us the most in this research was this little guy, the Brazilian Treehopper. Despite its name, this insect can actually be found throughout the world, although it is easy to miss due to the limited amounts of movement it displays.

It’s most noticeable feature is, obviously, the distinctive protrusion coming from its head, which can resemble a cluster of eyes from some angles. Despite being the insect’s most memorable feature, scientists still have no idea what purpose the headgear serves, although they do have a number of theories including that it may be a way to deter predators. 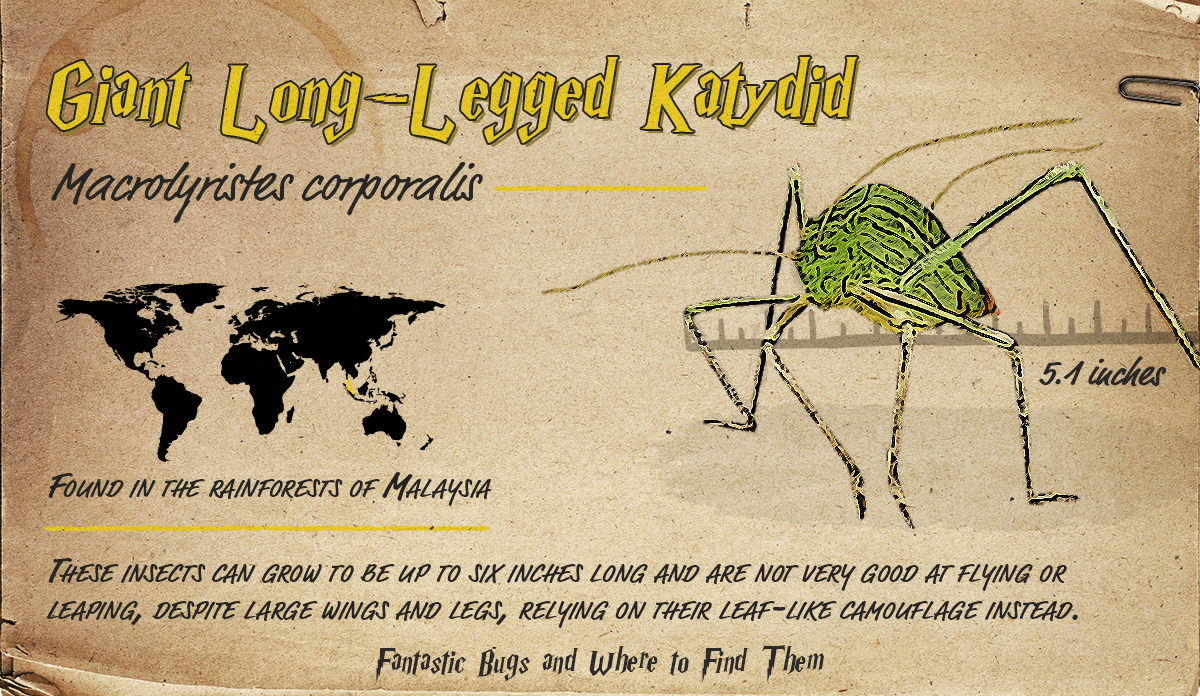 At first blush, this insect looks like a normal grasshopper and in truth, they share many characteristics with that common bug. The difference here is one of scale, as the Giant Long-Legged Katydid can grow to be up to six inches long. To help get a sense of scale, the average size of a human hand, measured from the tip of the middle finger to the wrist, is 7.44 inches for males and 6.77 inches for females, meaning these bugs would encompass nearly the entirety of most people’s palms!

Despite the enlarged size of their legs and wings, these Malaysian insects are actually very bad at both flying and leaping. To compensate for their poor mobility, they utilize a camouflage defense that relies on their resemblance to a leaf for survival. 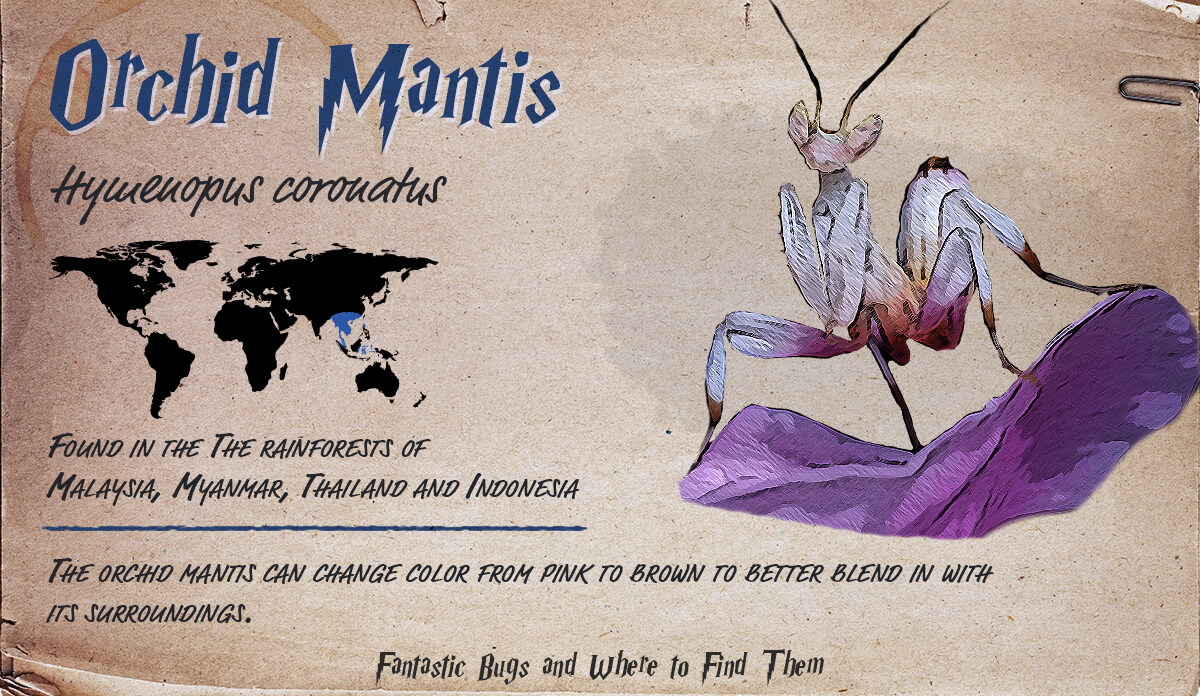 One of the most stunning insects we discovered in our research is the Orchid Mantis of southeast Asia. These bugs have legs and bodies that resemble orchids and other flowers native to the area, allowing them to blend in to avoid predators. This resemblance is augmented by an ability to change colors from pink to brown to better fit their surroundings. 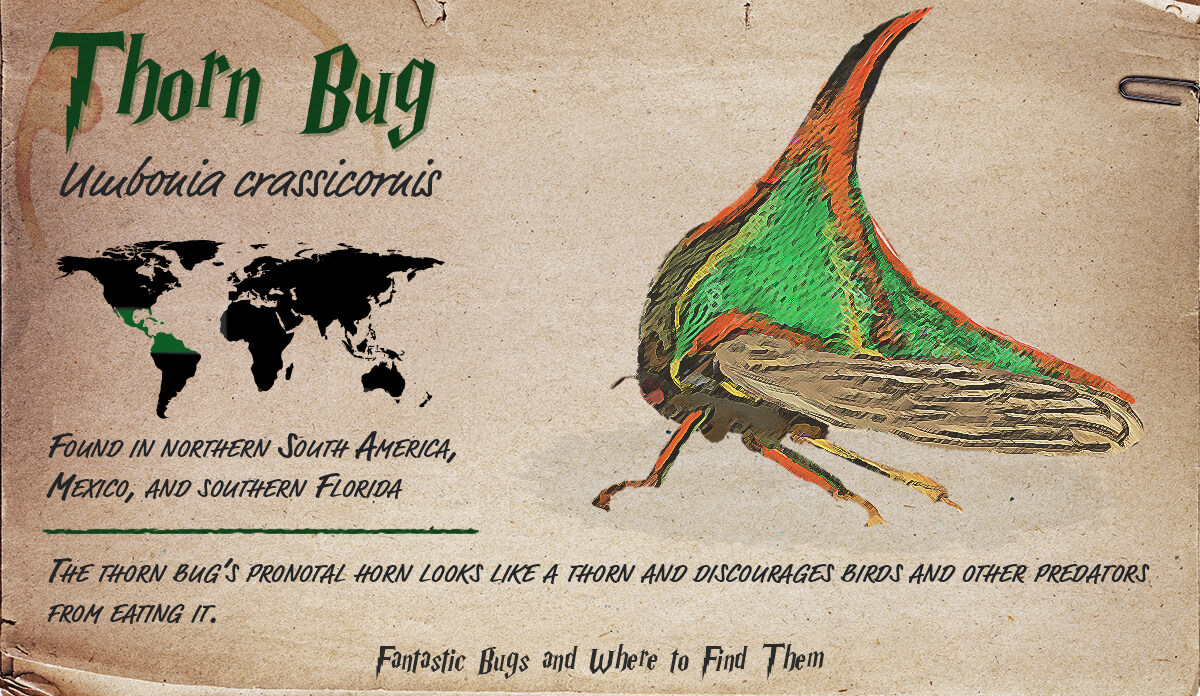 It isn’t very hard to figure out how the Thorn Bug got its name. The distinctive horn on the heads of these insects varies slightly between male and female members of the species, but all serve the same purpose of discouraging predators, particularly birds, from attacking them by presenting their sharp thorn prominently. Thorn Bugs are commonly found in trees throughout the northern portions of South America, throughout all of Mexico, and as far north as south Florida. 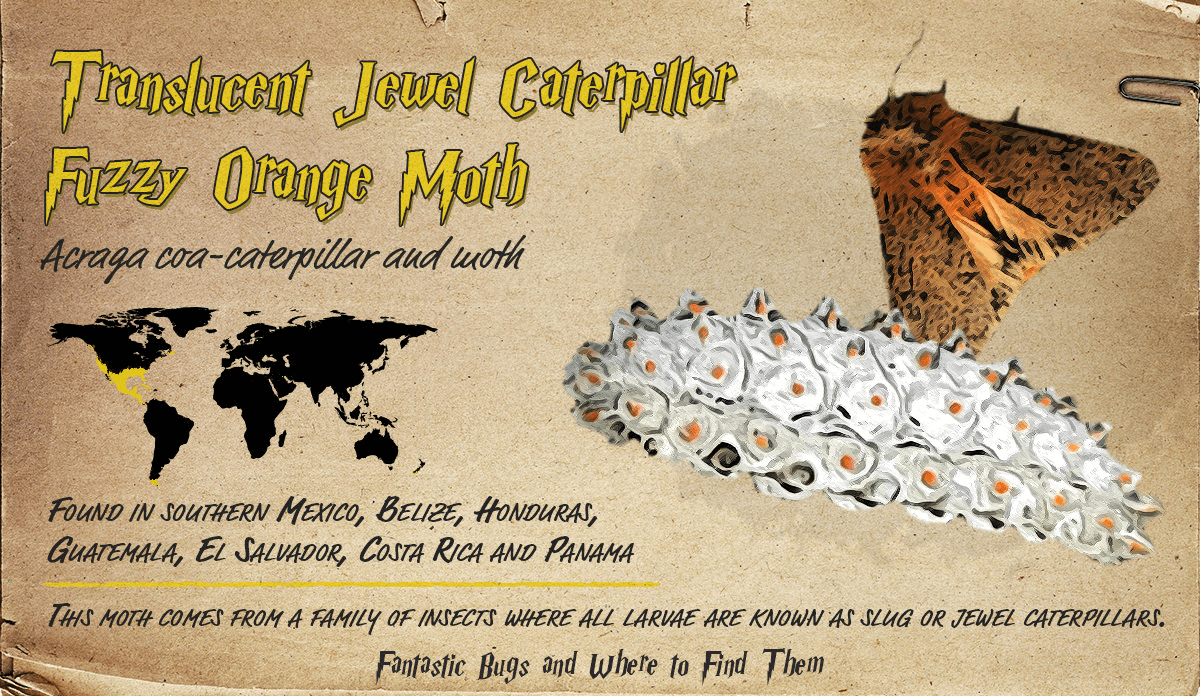 This is an insect that is so interesting at two different stages in life that we had to include them both in one entry. The Translucent Jewel Caterpillar, found throughout Central America, comes from a family of insects that are collectively known as Jewel Caterpillars. They are given this name because of the colorful markings on their uniquely gelatinous bodies, which are also translucent (meaning you can partly see through them).

This specific branch of the Jewel Caterpillar family tree is notable because it rejects the idea that it needs to become more boring when it grows up. Upon emerging from their cocoon, these bugs become Fuzzy Orange Moths, creatures that are covered with a fine fuzz-like substance over their entire bodies, making them look like stuffed animals come to life! 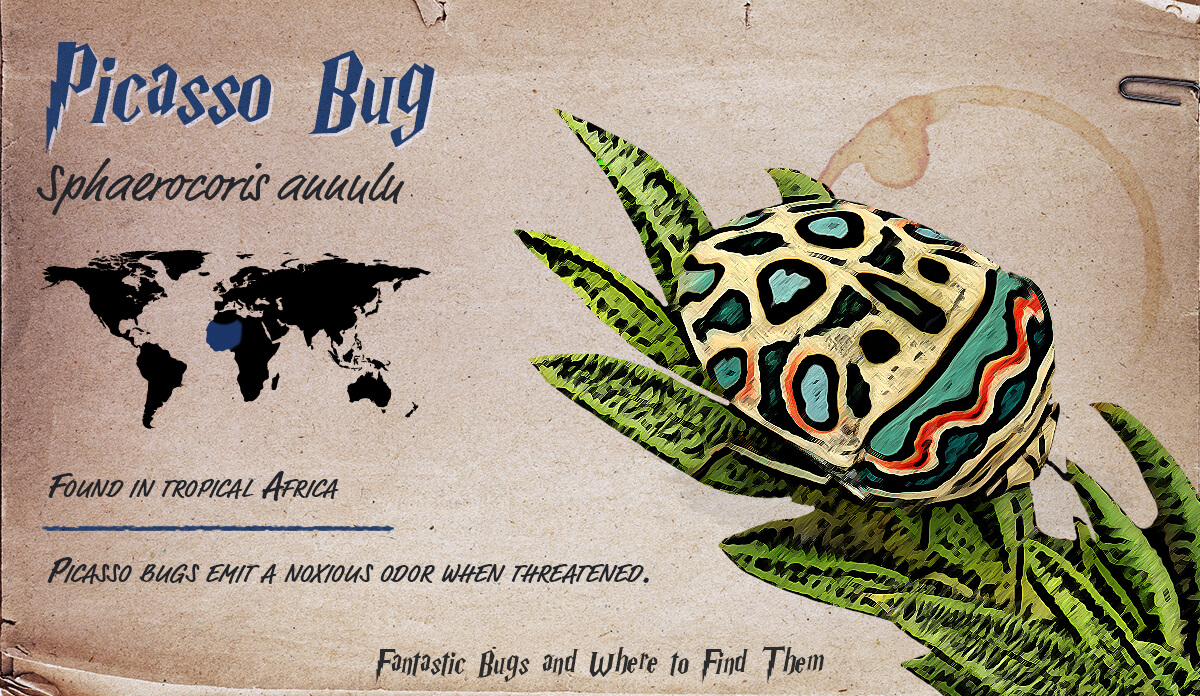 One of the most visually stunning insects we found during our research, the Picasso Bug looks like an art project come to life. These insects are native to Africa and feature breathtaking colors and patterns on their backs that look as if they were painted on by an artist, hence their name that nods to one of the most popular and enduring artists in history. To compensate for being so brightly colored and distinctive to the eye of man and beast alike, these bugs can release a noxious odor when they feel threatened, similar to how a skunk defends itself. 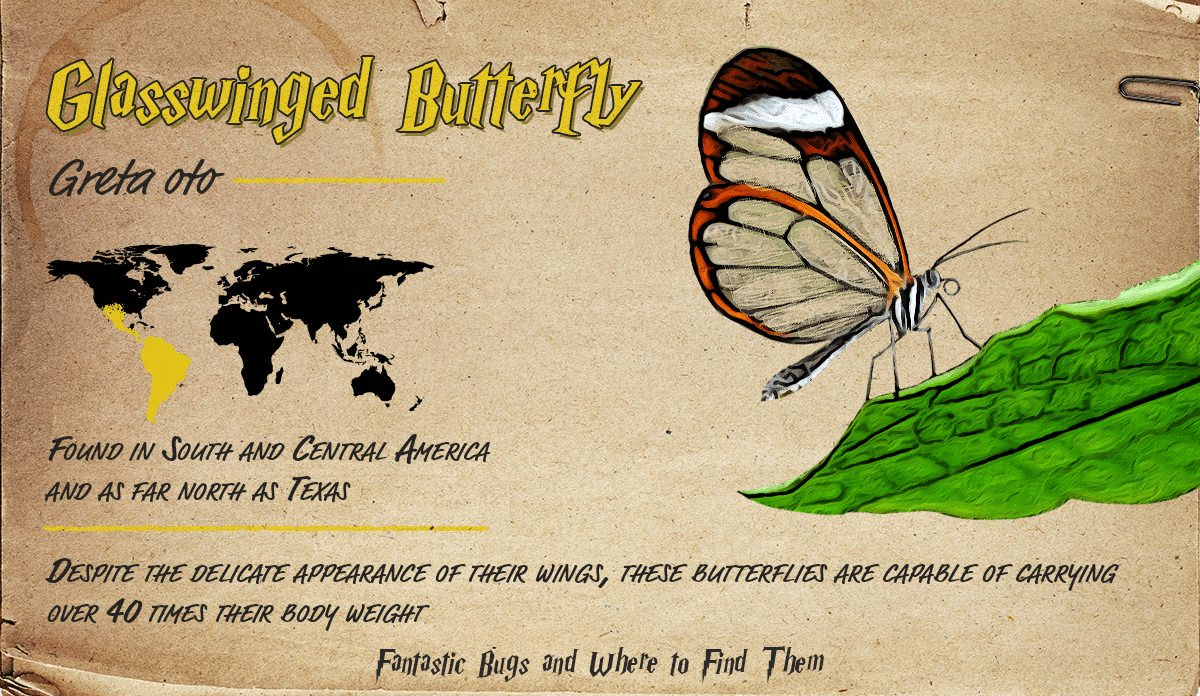 Another insect that we found that looks like it was put together by an artist is the Glasswinged Butterfly, which can be found throughout South and Central America and as far north as Texas in the United States. As the name implies, these insects have translucent wings that give the impression that they are made of a glass-like material. Don’t let that appearance fool you into thinking these bugs are delicate, however, as they are capable of carrying weights over 40 times their own body weight! 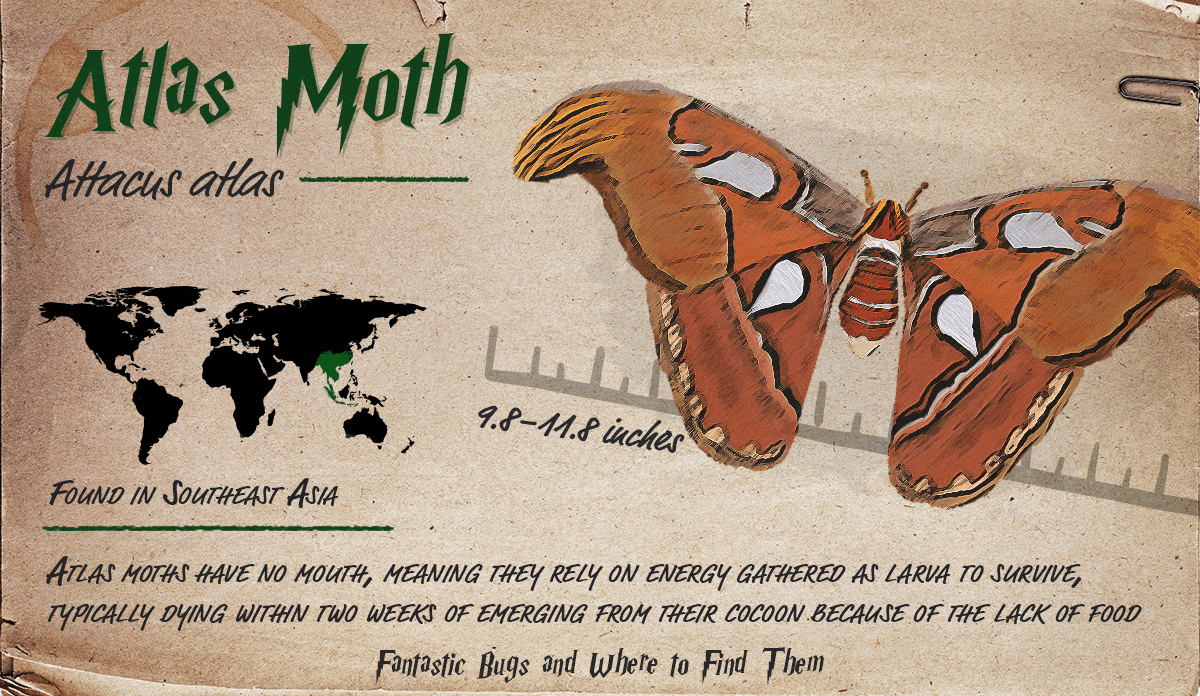 Remember the Giant Katydid from earlier? Well, their southeast Asian neighbor, the Atlas Moth, makes those giant insects look tiny by comparison. With a wingspan that can be nearly a foot long, these bugs feature distinctive marking on their wings including tips that look remarkably (and creepily) similar to the head of a snake. Adding to the creepy factor of these moths is the fact that they don’t have a mouth or any other way to consume food, meaning they rely entirely on the energy they gathered as larva to survive during their lifespan, which only lasts two weeks. 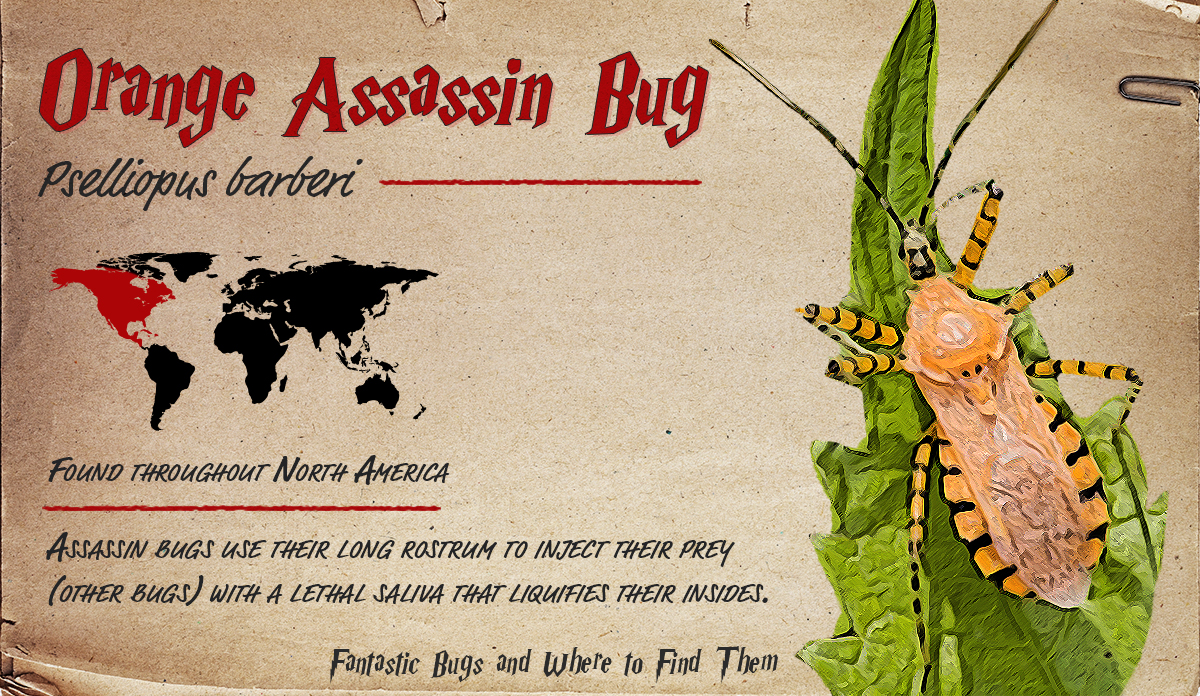 North America’s Orange Assassin Bug is notable for its distinctive tiger-like markings and for the rather intense way they gather nourishment. These bugs prey on other insects and do so in gruesome fashion by using their long rostrum (the little snout/needle many bugs such as mosquitos have) to inject a lethal saliva into their prey. This saliva liquefies the insides of their victims, which the Assassin Bug then sucks up with their rostrum for nourishment. 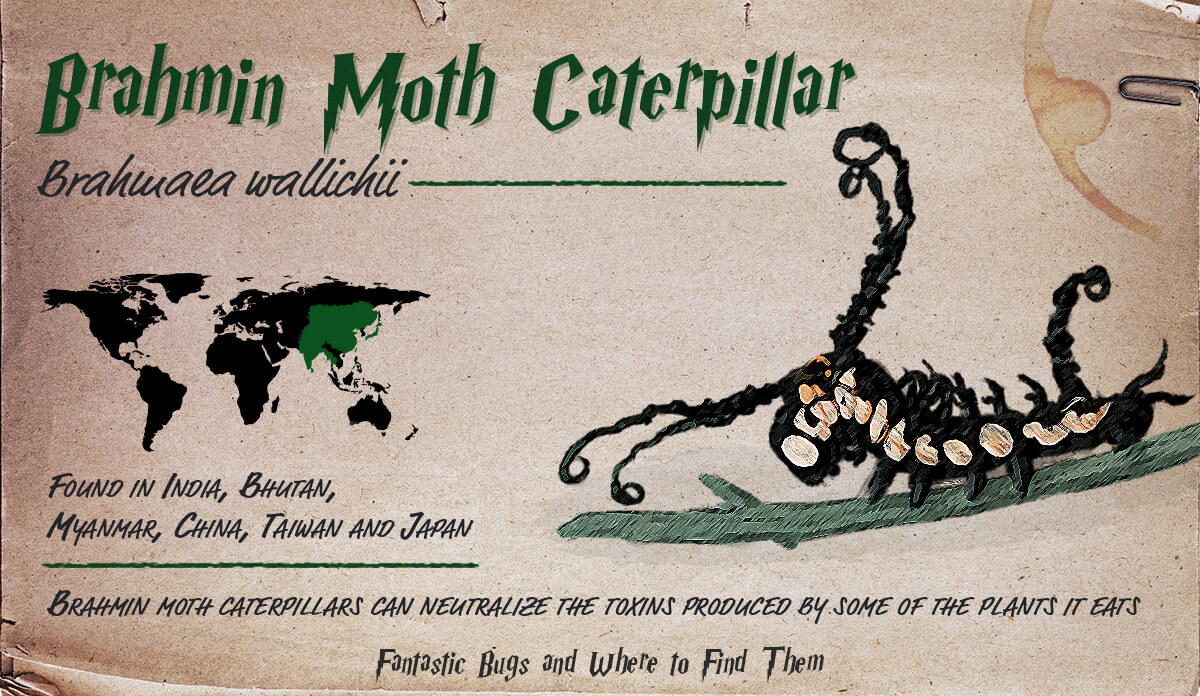 The final insect we wanted to include in our examination of Fantastic Bugs is the truly bizarre Brahmin Caterpillar Moth, which resides throughout Asia. This bug looks like something out of a comic book, with intimidating black coloration combining with multiple strange appendages to give it an intimidating look when approached by predators.

While they may not have the purely magical properties of the creatures from the Harry Potter universe, these real-life insects hold a magic of their own, reminding us that there are plenty of Fantastic Beasts to be found in the real world around us.

And remember, should your home be visited by an unwelcome pest, no matter how fantastic, you can always turn to Insight Pest Solutions to handle it! 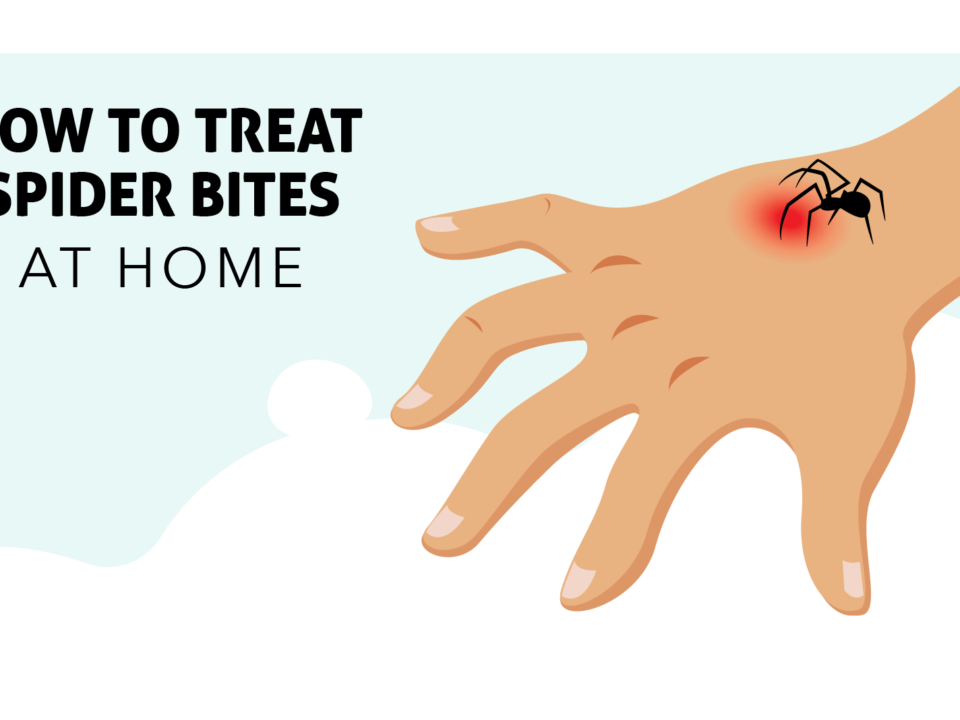 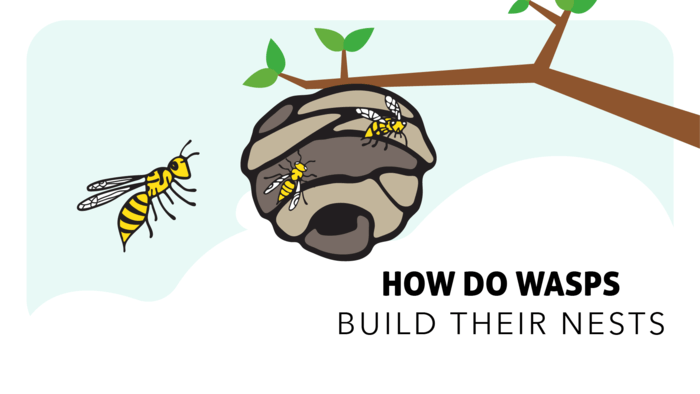 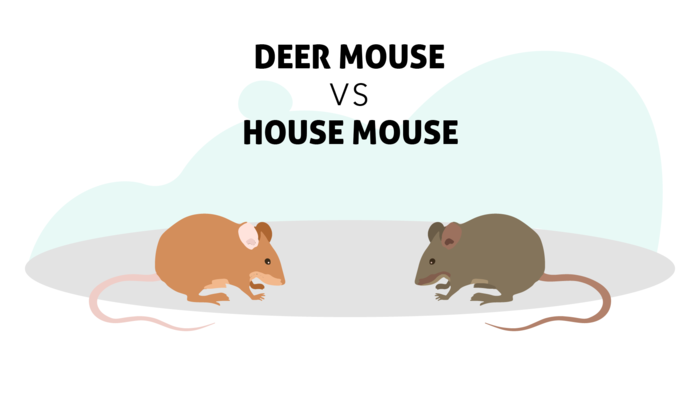